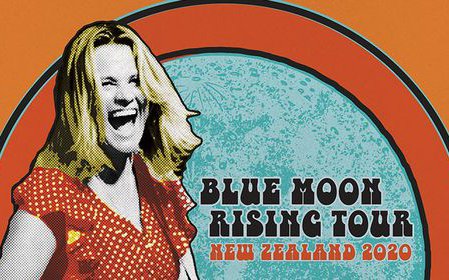 The New Zealand singer-songwriter, who moved to Nashville in 2017, returns home for a 16-date summer tour

NASHVILLE, Tenn. - Singer-songwriter Jackie Bristow, who has made her home in the music mecca of Nashville since 2017, is set to begin her Blue Moon Rising tour in her native New Zealand in early 2020. She will play a string of dates that extend from Jan. 12 through March 5, starting off at the TSB Festival of Lights in New Plymouth, and winding up at MASSAV Monkfest in Arrowtown. Jackie will be playing the dates solo, and she’ll be performing new material along with favourites from albums like 'Shot of Gold' and 'Freedom'

Jackie made the move to Nashville from Los Angeles, and she had also spent a significant amount of time in Austin, where she had cut all of 2010’s Freedom with guitarist-producer Mark Punch, and wrote Shot of Gold in Austin. In Nashville, she’s been working with Mark on a set of new songs that includes the soul-tinged “Tennessee,” an ode to the river that connects the Volunteer State to the famed Muscle Shoals area of northern Alabama. She’s also been playing a series of shows with Mark around Nashville, appearing at iconic Music City venues like 3rd and Lindsley, the Basement and the Local. In the home of country and Americana, she’s been immersing herself in Nashville’s multi-layered music, with a little Memphis on the side.

Away from Nashville, Jackie has loyal fans in Europe, where Shot of Gold was released 2018 via Timba/Universal to rave reviews. As she says, her 2018 and 2019 European tour also got kudos from European audiences, who she says got the message--standing ovations and encores, and the kind of enthusiasm that keeps an artist going. Back in the U.S.A. she’s continued to open for major acts, like Boz Scaggs and Chris Isaak. Her Shot of Gold song “Rollin’ Stone” has been featured in the mega-popular New Zealand television series The Brokenwood Mysteries.