In their music and in their lives, Tattletale Saints don’t bow to societal pressure. One of the album’s standout tracks, “D.I.N.K.” highlights the joys of being childfree. 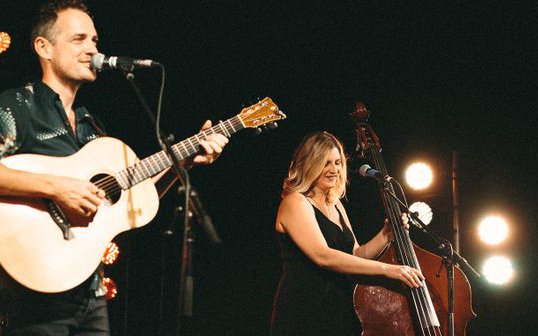 Summer 2020 sees Tattletale Saints return home to celebrate the release of their new album, Dancing Under the Dogwoods, out on January 24th.

Originally from Auckland, 2014 Tui Award winners Tattletale Saints now live in Music City USA, Nashville Tennessee. With the 2020 release of their third full-length album, vocalist/guitarist Cy Winstanley and vocalist/bassist Vanessa McGowan celebrate choosing a tough path and conquering seemingly insurmountable obstacles to chase a dream. With thoughtful and minimal production, their third release showcases the duos perfectly intertwined harmony vocals and Winstanley’s clever yet emotional songwriting. Their musicianship, while always masterful, feels relaxed on this offering, as though they no longer have to prove themselves. It is clear that Winstanley and McGowan have spent years working towards the creation of music that is organic, honest and effervescent, and with Dancing Under the Dogwoods, Tattletale Saints truly are here at last.

At its core, Dancing Under the Dogwoods is a triumphant album, celebrating endurance and fortitude. On the album’s closing track “Here at Last” Winstanley sings of seeing the light at the end of a long tunnel. “There were times when we thought that it never would come/waiting on a train that never would run/burning up hope like a shot from a gun….Here at last, it’s here at last/the dream we had/is in our grasp….the years we gave/were not in vain”. The lines ring true not only for their personal journey but on a macro as well. “I was thinking about immense societal shifts” explains Winstanley, “How it feels when you’ve worked for something for so long as a community and it finally happens.''

In their music and in their lives, Tattletale Saints don’t bow to societal pressure. One of the album’s standout tracks, “D.I.N.K.” highlights the joys of being childfree. “Double income/no kiddies/living downtown close to the city/doing what we want/happy as a clam/money in our pockets/time on our hands” the duo sings. The song feels so good that one wonders why anyone would ever want to have a family. The pair seek the same care-free feeling in their music, “Neither of us are trying to force the songs into any one genre,'' says McGowan of the albums’ 10 tracks, which move from country and cajun influences to jazz and folk-rock with ease.

Audiences on the New Zealand tour will be treated to songs from the new release, favourites from the duo's previous two albums, and Tattletale Saints' reimagining of country and folk classics.