Older experienced heads led the way at the weekend’s double header rounds of the Calder Stewart Cycling Series in Hokitika. 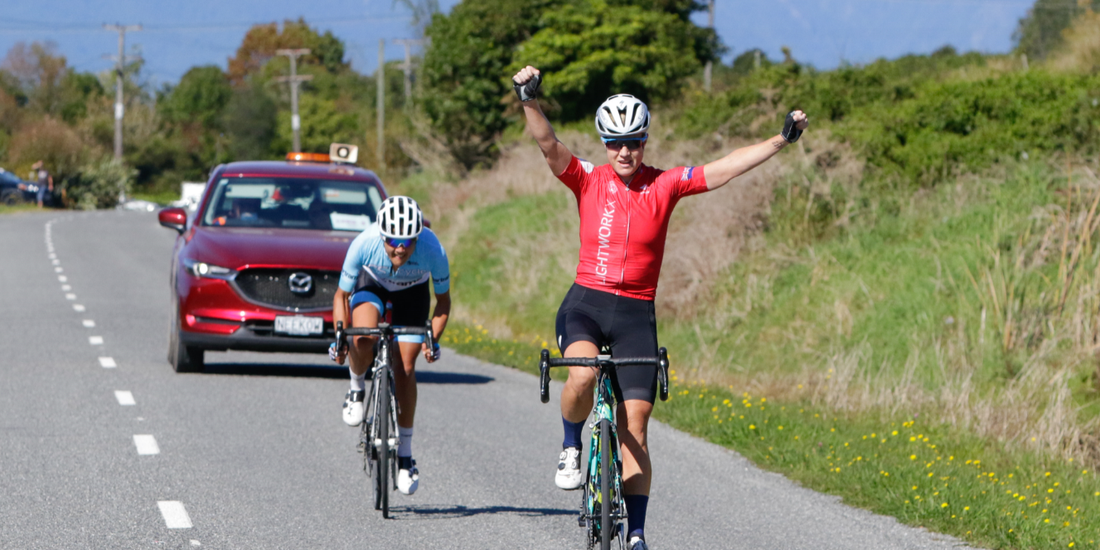 Older experienced heads led the way at the weekend’s double header rounds of the Calder Stewart Cycling Series in Hokitika.

Hollamby, who had to be talked back into racing in the series by her Lightworkx Photography Development team mate and series leader Kate McIIroy, also won Saturdays 20 kilometre individual time trial, making it a very successful return to competing in the series after an absence of two years.

Thirty year old Williamson last won a round in the series in the same year he was national champion, 2012, saying he has not been racing much as his focus has been on sitting up a new bike shop in his home town of Alexandra.

“Summer has been busy with setting up the new shop but over last few years I have been switching a bit between road and mountain bike racing when I can so I can keep my hand in the game,” Williamson said.

Hollamby, who is focused on the New Zealand age group championships at Pleasant Point near Timaru at the end of the month, said she hoped to do well in Saturday’s time trial so to win both days was very satisfying.

“I came over to Hokitika targeting the TT as it suits me, it’s my kind of riding, me against the clock, no hiding, no sitting in, just riding hard,” Hollamby said. “So I was very happy to take the win and in the road race we knew Kate and I would have big targets on our backs so we both needed to ride smart.”

Hollamby paid tribute to her Lightworkx Photography Development team mates saying they worked well to keep the race together in the first lap looking after their two protected riders and setting up herself and McIIroy to win the two Small Business Accounting Most Combative Rider uphill sprints.

“The defining moment of the race came at the top of the main road, I attacked hard and Alana Forster came with me, we dug very deep and instantly got a gap,” Hollamby, who won in two hours and six minutes, said.

“We worked together and pulled a decent gap and no one caught us then I managed a sneaky sprint win for the double. I've done a lot of these Calder Stewart races and have never been at the pointy end when it counts so to take the double in one weekend is very satisfying.”

Hollamby said she gave up riding in the Calder Stewart Series as she felt she was getting too old to race with the younger girls, but after being persuaded to come back to help out with the Lightworkx Photography Development team she is enjoying being back amongst it.

“There are four very strong woman's teams in the field and it is great racing. This is one of the hardest woman's races I've been involved in; it's great to see domestic racing in New Zealand being so competitive. It's got to be good for the development of our young female riders looking to head overseas.”

McIIroy, who was fifth in today’s road race and second in yesterday’s time trial, consolidated her women’s series and Small Business Accounting Most Combative Rider leads while with Hannah Bartram from the Mike Greer Homes efforts of third in the road race and sixth in the time trial saw her take the Under 19 series leaders jersey off Henrietta Christie (Velo Project).

The pace was on right from the start in the elite men’s race with Williamson’s SBS-Ricoh team prominent and actively covering any moves.

“I found myself up the road several times but the right move only stuck on the second to last lap,” Williamson said. “It was a really tactical battle in the final ten kilometres in the hills with the Ridge Homes guys having two in the move and they were attacking a lot.”

Williamson showed all his years of experience in the closing kilometres, positioning himself well and conserving what he could for the final sprint.

“It was one of the longest sprints I’ve done going from three hundred and fifty minutes out and cramping most of the way to the line, but it was great to get a win on the board for the team,” Williamson said.

Pithie was second and Hewitt finished third with Marryatt doing enough to take the series elite men’s leaders’ jersey meaning Kees Duyvestyn (SBS Ricoh NZ) will wear the Under 23 leader’s jersey in round four when racing resumes in Nelson in September.

Logan Currie’s (Transport Engineering Velo South) strong time trail where he was third overall and his eleventh in the road race, but more importantly, he was the third Under 19 rider home, saw him take the young riders jersey off Ari Scott (Team Skoda Fruzio).

Karton, who train’s a lot with his sister Hollamby, won the masters race in two hours and 26 minutes, out sprinting Rowlands and Justin Sims.

Once away they worked well to hold onto a lead that was less than 30 seconds at the finish that saw Lee Johnstone (Kiwi Style Bike Tours) win a bunch sprint to come home twelfth ahead of Christchurch Mitsubishi team mates Darryll Kircher and Russell Ownsworth.

Grieve’s efforts saw him take the 35 to 44 leaders jersey off Timaru cyclist Andy Hilton (Cycle World Emersons, Rowlands held onto the 45 to 49 age group leaders jersey and the over 50’s was taken off Chris Harvey (Cycle Lab Joyride) by Lowe.