A Walk in miner's footsteps on the West Coast

At Lyell my walk started on a rare, flat stretch of ground where today there is a campsite and a toilet block. Once, some two thousand people lived in the area and some of the men tramped two kilometres through the bush to the Croesus Battery. 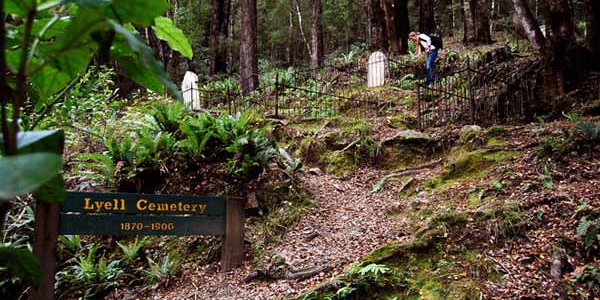 I followed in their footsteps on a track above Lyell Creek now easy to follow thanks to the work of the Department of Conservation (DOC) and the tread of thousands of tourists. As I pushed on through the dank vegetation, carefully negotiating the tangled masses of tree roots, I was mindful of a warning from DOC to remain on the main tracks as there were decades of mining in the area and deep shafts lie beneath the undergrowth. Decayed and fallen trees lay above and below the track and the air was pungent with the smell of rot and humus.

A short distance on I came across that most evocative place, a tiny bush cemetery. The dear departed could never have imagined there would be so many visitors. A middle-aged English couple were examining the site when I arrived. Some graves had headstone and railing, some headstone and no railing, some railing and no headstone and some neither headstone nor railing.

The dates reflected lives of toil and hardship. Mary Edge died in 1897 aged 48: ‘Afflictions sore long time she bore, physicians were in vain, till God above in His great love relieved her from her pain.’ A short way on, after crossing a bridge and puffing up a steep pitch of steps, I found I was on The Old Ghost Road.

This was started at Mokihinui in the north and Lyell in the south in the gold boom days but work stopped when the boom ended. Tramping and biking enthusiasts have completed the work of the pioneers and today a 60 km-track connects four ghost towns — Seatonville, Zalatown, Gibbstown and Lyell. I followed the arrow pointing to the right, to the Machine Track and the Croesus Battery.

Ten minutes on I came to a point overlooking the old battery, down by the creek. I had to wonder, how did they get that enormous piece of machinery there? Its pounding had once echoed down the valley, reminding the townspeople, hour after hour, day after day, what their privations were for. Information panels told me a trial crushing had been promising but the battery had not been successful. Were the miners teased by the thought that El Dorado could be tucked away somewhere nearby?

On my return walk I realised I had left my wallet in full view in the car and the riches I did have could be whipped away from me at any time. I was, though, slightly comforted by the thought that people who immerse themselves in Nature are less likely to pilfer from one another. On the other hand, the campsite is close to a main road.

To my great relief, my car and belongings were intact. My faith in humanity was reaffirmed but I vowed to not test it again. 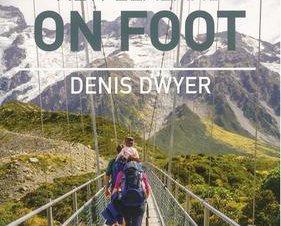 By Denis Dwyer who did this walk for his recently published book, ‘New Zealand On Foot’