A Weekender in Westland

Tinkling water is such a tranquil holiday soundtrack. Its soothing cascade, accompanied by the regular chorus of native birdsong routinely enriched my winter weekend escape to the woolly and wild reaches of the South Island’s West Coast. 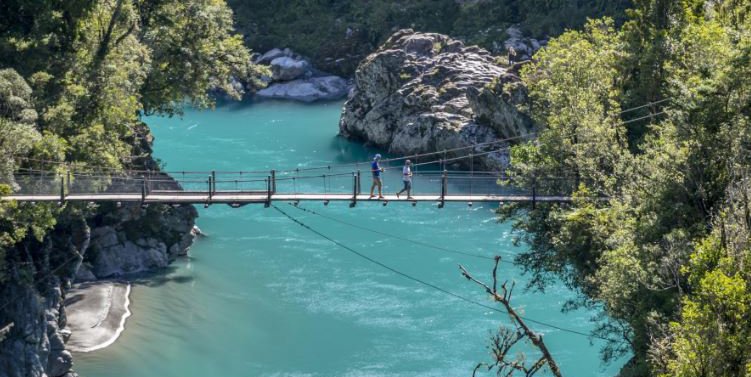 Tinkling water is such a tranquil holiday soundtrack. Its soothing cascade, accompanied by the regular chorus of native birdsong routinely enriched my winter weekend escape to the woolly and wild reaches of the South Island’s West Coast. Hemmed in by the Tasman Sea and the serrated peaks of the Main Divide, there really is no region in New Zealand quite like it.

After soaking up the scenic medley of undulating landscapes from the panoramic passenger windows aboard the TranzAlpine, from Christchurch to Greymouth, I swapped the rail tracks for the roadway to free-roam the West Coast’s delights. My first stop was Shanty Town, a faithfully re-created 1860s gold-mining town, complete with pub and post office. There are lots of interactive experiences to try your hand at, including gold-panning, sawmilling and the far more leisurely pursuit of the miniature train rides.

Highlights include the cluster of 30 gold rush era buildings, painted in the bright colours of boiled sweets. Enjoy a tipple in the evocative Golden Nugget Hotel, learn the art of gold panning and enjoy the short movie in the opulent Victorian-themed theatre, where holographic technology brings to life the extreme stories of hardship and danger characteristic with the gold boom. But the prize draw are the steam train rides following an original bush tram-line through native rainforest, replete with vestiges of the goldmining era.

Heading further south on SH6, I went as far as Ross, a cute-as-a-button settlement, with a storied past in gold-mining. The historic village of glories lost sports a cluster of colonial buildings, including the old Ross jail and miners’ cottages. The 150-year old Empire Hotel (the current building dates from 1908) is one of the most treasured on the Coast, bursting with history, personality and great pub cuisine. Whitebait, anyone?

From Ross, I ventured back up SH6, to take in a recent addition to Westland’s stable of top-billing attractions. Turning off the highway on to the Woodstock-Rimu Rd, the $7 million Treetops walk is a series of elevated steel walkways allowing you to traverse the canopy of the podocarp forest by Lake Mahinapua.  25 metres above the forest floor, the mesh-steel gantry leads you through a dense vista of native forest, with giant specimens of rimu, kamahi and matai, interspersed with tree ferns, orchids, liverworts and fellow forest floor residents.

Lush and intimate, the highpoint of this 4 year old attraction, is the 47metre high spiral staircase leading you up to lofty views of the forest, Lake Mahinapua and the mountains of Westland. www.treetopsnz.com  The lovely Treetops staff, who will equip you with a brolly if it’s wet, advised me their most frequently asked question is how to get to Hokitika Gorge from here.  And if you have the time, Treetops is the perfect starting point for a grand circuit of the Hokitika Valley, lacing a slew of striking spectacles into one great hinterland drive.

From Treetops, head to Rimu and Woodstock, two pint-sized vestiges of the goldmining legacy, with a spectacular lookout over the Hokitika River and panels illustrating one of the Coast’s last great gold rushes.  Follow the signposts to Kokatahi and Kowhitirangi.  The West Coast’s multitude of vivid greens comes into sharp focus as you wend your way through the fertile farmland. From here, a short gravel road leads you to one of my favourite New Zealand settings, the ravishing granite ravine of Hokitika Gorge.

Sometimes you’ll see a photo of brochure perfection of a scenic spot and you think, yeah right, I better it doesn’t look that good in the flesh. But Hokitika Gorge is one of the rare exceptions where the setting is as dreamy as reality gets, deep in the Whitcombe Valley. Right by the Alpine Fault, surrounded by dense native bush, thronging with native birds, the turquoise water is so absurdly vivid and otherworldly, it looks photo-shopped. (It’s due to the glacial flour seeping into the water.)

But after heavy rain, the water turns a soupy grey, so you will be at the mercy of the weather gods. Either way, cross the swing bridge and take in the enchanting bush walks, adjacent to the gorge. After you’ve had your fill of turquoise glory, complete your valley circuit by following the sign posts around the eastern side of Lake Kaniere, taking in the lusty waterworks of Dorothy Falls. If it’s been raining heavily, the upside to nature’s vagaries is that the falls will be gushing like a fire hydrant. Directly adjacent to the road, it’s the easiest, shortest of walks to waterfall wonder. From there, a plethora of lakeside spots beckoning you to pause, before completing the circuit in Hokitika.

You’d be hard pressed to find any other town or city in New Zealand with more galleries, studios and arty types.  Within this creative powerhouse, you could spend all day wandering the wide streets of Hokitika, admiring the studios, talking to the painters, glass blowers, craftspeople and pounamu carvers.  Scattered across windswept, wave-lashed Hokitika Beach, the sculptural driftwood art is ever-evolving. Unleash your own creative juices and assemble something, while you’re there.  If you’ve ever seen those iconic West Coast stone mats, fashioned as door mats or table mats, Waters Edge headquarters is just out of town, on the Kumara Junction Highway. They make for a trusty, totally usable memento.

For a legendary West Coast hospitality experience truly out of the box, you must stay a night at the resplendently restored Theatre Royal Hotel in Kumara. Handily located half way between Greymouth and Hokitika, this grand old hotel first opened its doors in in 1876, at the start of the Kumara gold rush. Even Richard John Seddon was known to take to the stage and sing. The current owners Kerrie and Mark Fitzgibbon bought the derelict hotel in 2010, spending nearly three years to restore it. Within the hotel, there are six artfully themed rooms, styled in honour of local characters, blending timeless elegance and vintage pieces with all the expected mod-cons.  Shown around by the duty manager Vanessa, she delighted in pointing out the Barbara Weldon Room.

During the restoration, workers discovered sawdust in the wall linings, a primitive form of sound-proofing. Dancing girls were employed to “dance” with the miners – although this room took it to a horizontal level.  In addition to the hotel rooms, a cluster of authentic cottages and the Old Bank of New Zealand have been transformed into accommodation suites and rooms. You’ll enjoy a heady dose of Kumara’s community spirit in the bar and dining area every night, which spills forth with vintage West Coast conviviality and their trademark laconic humour.

I feasted on fresh turbot in beer batter, while for desert, don’t go past the apple crumble and custard.  140 years on since the Theatre Royal Hotel first opened, this venerable beacon of hospitality powers on. Unsurprisingly, the hotel is repeatedly showered with awards. You must experience it. www.theatreroyalhotel.co.nz